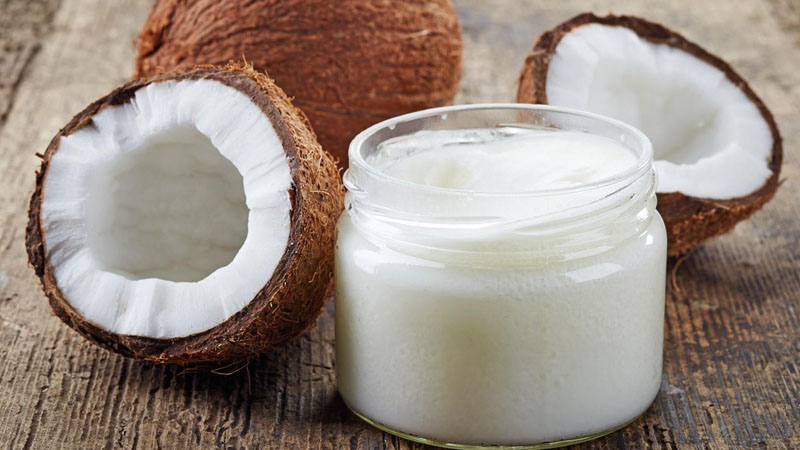 Coconut oil is an increasingly popular food supplement in the Western world due to its many benefits to mind and body alike.  It is popular among athletes, academics and those looking to lose a bit of weight or boost their ability to get through an exam with enough focus and energy.

Coconut oil is high in healthy saturated fats, which are the main reason why coconut oil gives out so many benefits.  These fats have many benefits to the body including providing quick energy to your brain and body, reducing fat storage and reducing the risk of heart disease by raising the good cholesterol in your blood.

The fatty acids in coconut oil are medium chain triglycerides.  These fats are shorter than most other fats found in our diet such as palm oil which is found in nearly every food product out there.

Medium chain fatty acids go straight to the liver when you eat them and are converted to energy or ketones.  This means they are not stored as fat.   They also offer many health benefits as a result of the way they are processed by the body.

Below we take a look at the many benefits coconut oil has to offer.

One of the main benefits of consuming coconut oil in small amounts daily, is its ability to increase fat burning and thus reduce body fat.

Obesity is a growing problem in the Western world and while part of the problem is the amount of calories people are consuming on a daily basis; the other part is the quality and source of those calories.

In fact 15-30 grams of MCTs per day increased 24 hour energy expenditure by 5% compared to LCTs.  This equates to about 120 additional calories being burned a day (​2)

An analysis of numerous trials on MCTs and body composition, sought to examine whether MCTs enhanced fat burning and increased metabolism.  They found that the trials they assessed did show that MCTs improved body composition and that those who consumed coconut oil had less body fat, smaller waists and lost weight (​3).

It should be noted that in some studies commercial bias may be present.

Well given that coconut oil helps burn fat, it doesn't come as a surprise that it helps you lose weight too.

Research has shown that coconut oil can help obese women reduce abdominal fat and fat that surrounds the organs.

One study involved 40 obese women with a large amount of abdominal fat. They were given 2 teaspoons of coconut oil over a 12 week period.  After 12 weeks their was a significant reduction in waist circumference (​4).

3. Coconut Oil Can Suppress Your Appetite

Another way coconut oil can help you lose weight is by suppressing your appetite and helping you feel full.  In one study done on overweight men, it was found that those taking coconut oil for 28 days had less of an appetite and desire to eat than those consuming LCTs.  As a result they also lost weight.

Another study found that those who ate the most MCTs at breakfast ate fewer calories at lunch time.  It also signinficantly delayed the request for lunch too (​5).

One study that looked at 116 patients, showed that those that included coconut oil in their diet increased the good cholesterol there had compared to those who didn't include it (​7).

Coconut oil contains a whole host of things that can help strengthen your immune system.  It contains lauric acid, caprylic acid and capric acid which are all antifungal, antiviral and antibacterial.

Lauric acid is converted to monolaurin in the body which has been shown to be an effective way of fighting bacteria and viruses (​9).

This includes fighting systemic candiasis or yeast infections as a result of an overgrowth of the yeast Candida albicans (​10).

Alzheimer's is the most common cause of dementa.  Patients with Alzheimer's disease are not able to use glucose for energy in certain parts of their brain.  As a result these parts starve and die off.

Instead ketones have been shown to provide an alternative energy source for those brain cells that arne't able to use glucose as a fuel.

In one study the comsumption of MCTs led to better brain function in patients with mild Alzheimer's (​11).

Coconut oil is used in a process called oil pulling which essentiall is using it in your mouith.  This prevents plaque formation and plaque-induce gingivitis (​12) as well as kills harmful bacteria in the mouth and reduces bad breath (​13, 14​).

8. Can Help Protect & Moisturize Your Skin

Coconut oil is great for your skin.  According to a study on the effects of plant oils on the skin, coconut oil was found to have antibacterial, anitoxidant, anditageing and antiinflammatory properties (​15).

As a result it can be beneficial in the treatment of many skin conditions such as psoriasis and eczema.

Coconut oil was also found to be helpful for dermatitis.  One study showed that coconut oil was significantly effective at relieving symptoms of atopic dermatitis compare to mineral oil (​16).

Other studies have shown that coconut oil can help improve the moisture content of dry skin (​17).

9. Can Give You Beautiful Hair

Coconut oil can give you beautiful healthy shining hair.  It can protect again hair damage (​18) due to its low molecular weight allowing it to penetrate the hair shaft.

So if your hair has lost its shine and health, giving it a good dose of coconut oil once a month can help it get back to its best.

It can also help with dandruff.  Smother it on your head, leave for 20 mins and then wash out.  It's antibacterial and antifungal properties will have your hair dandruff free.  I have successfully used this in this way.  Of course you have to continue to do it but usually once a month keeps things maintained.

It has many benefits.  To add to this list of benefits it is also worth noting that...

Populations Where Coconut Oil Is Eaten A Lot Are Healthy

Coconut oil has become increasingly popular over the last few years due to its many health benefits, however it is still quite an unusual product to find in one's kitchen in the Western world.

Whereas in other parts of the world coconuts are a staple food.

The Tokelauans who live in the South Pacific get over 60% of their calorie intake from coconuts alone.  They are the largest consumers of coconut in the world.

This population has been studies and found to be in great health with very low rates of heart disease (​19).

It is worth pointing out that this population eats coconut cream, coconut flesh and coconut oil straight from a coconut, rather than in the same way we do in the Western world.

So with that in mind go enjoy some coconut oil for better health now.